Angels And Fairies – Your Connection With These Divine Beings 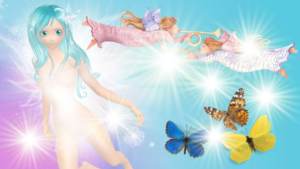 Have you ever wondered what are the two main differences between angels and fairies and what are their roles in your life?

Angels and fairies are among the most interesting nonphysical beings. When we were kids, we were wondering about these beings and how we can see one of them for real. But fairies and angels are a group of beings who belong to the category of spirits called light spirits. And so, we find it difficult to see them.

They live, manifest, and belong to the realm of Divine Light, Source Oneness, or Heaven. Whatever way this place has been called by cultures and core belief systems, we can be assured that light beings are positive and benevolent beings. That’s why many of us are fascinated by them and want to invite their presence into our lives.

The Meaning Behind Angels and Fairies

The word angel is of Greek origin from the word “Angelos” which means “messenger”.  Angels are God’s messengers. They carry God’s messages and transmit them so they will surely reach the physical realm.  They bring with them a wide range of human experiences to bring assistance to.  God is so far away from the human dimension when it comes to the vibration spectrum. Humans have no way to reach Divine Source as we belong in the lower frequencies.

That’s why angels are there to make sure we get God’s messages. Even so, angels have a very high vibration that it is also a challenge for them to connect to us as our energy is of a different frequency with our angels. Because of this, angels use signs and symbols to bring their message to us.

As spiritual beings, they come as light, energy, color, and vibration which can be perceived by our thoughts and feelings. Their subtle energy can be felt if we tune into their energy. Angels serve as a bridge from the physical world to the spiritual realm with their pure spiritual energy that represents God’s perfect love for us.  They connect heaven to earth and create openings to the divine within you.

On the other hand, fairies are lovely little creatures. They are very beautiful and appear somewhat delicate with wings.  Their wings differ from that of angels and vary across fairies, some clear and some colorful.  Some may look like butterfly or dragonfly wings. There are so many types of fairies and pixie wing types, and all are made out of magic.  Whether you prefer angels or fairies, it’s all up to your personal spiritual belief.

The Difference Between These Divine Beings

Angels and fairies have both been a favorite topic for years. There were many accounts of who and what they were. When it comes to angels, most of what we know about them is through the Bible and other religious texts. Through the centuries, artists have portrayed angels with powerful wings in radiant light.

Fairies however are usually associated with pagan myths or religions. In most cultures, there have been mentions of creatures that are believed to be fairies. Generally, fairies are viewed as supernatural beings who exist alongside human beings but living on different dimensions. They come in different forms usually of humanoid shapes and sizes.

One thing to note though, fairies are not immortal, and they do not enjoy extreme longevity either. As we learn about the presence of angels and fairies in our human existence, we distinguish and categorize them as those that we call our guardian angels and fairy guides who often come and assist us without us knowing. But when they make their presence known, you can feel, hear, and even see them with your naked eyes.

They may also manifest as flashes, balls, and twinkles of light, mostly appearing in the corner of your right eye. They are both known to appear to humans as light sources because essentially, that’s what they are as they exist in an energetic body. Have you experienced seeing flashes of light in the corner of your eye? Will you be able to distinguish if it was an angel or a fairy?

Here are a few ways for you to tell whether you were visited by an angel or a fairy.

1. Angels In Religious Texts And Fairies In Folklores

Angels and fairies have both been a favorite topic for years. There were many accounts of who and what they were. When it comes to angels, most of what we know about them is through the Bible and other religious texts. In the Old Testament, they were known as messengers of God who evolved into immortal divine beings of the heavenly realm through St. Dionysius, Aquinas, and Islamic scholarship. They are considered as limited manifestations of the mind of God.

Through the centuries, artists have depicted angels’ appearance with powerful wings in radiant light that are all based on imagination, because they were never exactly described.

On the other hand, fairies are usually associated with pagan myths or religions. In most cultures, there have been mentions of creatures that are believed to be fairies. Generally, fairies are viewed as supernatural beings who exist alongside human beings but living on different dimensions. They come in different forms usually of humanoid shapes and sizes.

2. Take Note Of The Color Of Their Lights

Angels often appear in bright and cool-toned colors. They may come as bold sometimes but are often in pastel color infused with white light from the background. It usually looks immense and widely dispersed.

While fairies often appear in vibrant and warm-toned colors and their light appears more compact. It can be likened to the colored string of lights we usually see on a Christmas tree.

3. Their Lights Vary in Brightness

What separates the angel light from that of fairy lights is that angel light is much bigger in size and shape and extremely bright which can take up your entire visual field.

On the other hand, fairy light is smaller in size and gentler on the eyes. Therefore, with fairies, you may see lots of little lights while with angels, there’s one abundant light.

4. You Can Tell By The Movement of The Light

Fairy lights have more movements than Angel lights. It tends to jump more from one place to another. While angel lights are more inclined to stay in one place or hover and have a direct path in and out of your frame of vision.

5. Take Note of the Length of Time

Angel lights appear incredibly bright but for a much shorter time. It tends to last for a few minutes to an hour. While fairy lights appear slightly longer and sometimes can be around for days or even weeks. This may be due to fairies being closer to the physical realm than angels.

6. You Can Tell The Difference By Their Purpose

Another worth noting difference between the two is where they help. Angels are more inclined to help in matters like life purpose and goals, your energy vibration, or anything that has to do with human affairs at a wider vantage point.

Fairies, on the other hand, are more towards helping with earthly matters, mood, and things that are associated with the planet or other beings around you.

7. How Are Angels And Fairies Connected?

Angels and fairies are entities that are related in a way that both beings exist in dimensions that are usually out of reach for the majority of human consciousnesses.

Although they may really be different and have many variations, angels are spiritual beings who have never been incarnated on earth except for the two known angels who were once human beings, Archangels Metatron and Sandalphon.

While fairies may be from alternative universes that were incarnated on earth for a purpose.  If you think about it, if what you want to ask help that pertains to earthly matters, then fairies would be able to give practical advice within this realm.

However, if we need advice with regards to metaphysical matters such as raising our vibration, transmuting negative energies into positive, shifting our consciousness and the likes, we can seek help from our angels as they are capable of making solutions to issues in the metaphysical realm.

Learning about their differences and how they are connected in a way will help you know their roles in your life. In this way, you can honor them and request help most fittingly.

Butterflies may be a common sight. And many times, their presence is often ignored. But they may bring an important message for your life. Butterflies are one of the most spiritual insects as they are often perceived to bring supernatural messages.

One of the most common beliefs is that whenever a butterfly tries to catch your attention beyond the ordinary it could mean you are visited by a deceased loved one. But it could also mean that angels and fairies would want to connect with you.

Angels and fairies often use butterflies to send us a message or to remind us of their presence. They want to send signals and assurance to us that they are there to help and guide us through life. This helps us become aware that spiritual messages can also come to us through butterflies.

Why would angels and fairies communicate through butterflies?

As beautiful creatures with colorful wings, butterflies have the charm and a way to capture the attention of humans.  That’s why fairies and angels make use of these beautiful creatures to be their messenger in the physical plane and in many ways, they help get messages through from the spiritual realm to the material world.

This means that when you see a butterfly, it could be worth paying attention to. Try to quiet your mind and examine your thoughts and feelings. Feel what your subtle senses are telling you and listen to your intuition.

Open yourself up to the unseen world and allow your inner vision to activate so you will be able to receive the message that your angels are wanting to tell you. In this way, you will clear the communication channels and you’ll get the message clearly.

Learning how angels and fairies differ will help us recognize them whenever they appear to us. This will help us know the purpose of their appearance and makes it easier for us to interpret their message.

They may use the same sign or symbol such as the butterflies, but they differ in their mission, purpose, and intent. And recognizing what entity is approaching us will help on how we receive the meaning and message that they want to convey to us.

Seeing a butterfly can be an incredible way to receive messages from the divine. And it is comforting to know that our angels take the time to assure and encourage us and help us through our life journey. We only need to have faith and believe that everything will be alright, and our future is going to be bright and beautiful.

How Angels Communicate With Us And How To Receive Their Messages? Twin Flames – Roles And Your Perfect Masculine / Feminine Counterpart

Divine beings like angels and archangels watch over you even when you’re not noticing. They are ready to bless you on a daily basis. But because angels are bound by the law of free will, they will not send you your blessings unless you invoke your angels and ask of them in a specific way.

Our daily blessings will not only send you divine messages to guide you on your journey, they will also teach you how to receive blessings and manifest miracles over time.